The story starts about a decade and a half ago, when in 2004, the administration of Mayo College, Ajmer invited Basics Architects to have a look at the boarding houses in-campus. These boarding houses were all heritage structures that would easily age more than a century and were in urgent need of expert attention. Years of changing user groups and shifting patterns in usage had taken their toll on these heritage structures, and remodeling was long overdue. That’s where we stepped in.

Mayo College is a boys’ residential public school in Ajmer, Rajasthan, India. The origin of Mayo College, one of the oldest public schools in the country, dates back to 1869, when Col. F. K. M. Walter, the political agent of the Bharatpur Agency recommended a school in India “for a large number of pupils, with a staff thoroughly educated-not mere bookworms, but men fond of field sports and outdoor exercise.” It was founded in 1875 by Richard Bourke, 6th Earl of Mayo who was also the Viceroy of India from 1869 to 1872, with Sir Oliver St.John as the first Principal and one boy, Maharaja Mangal Singh of Alwar. The school is one of the oldest public boarding schools in India. Considered to be the “Eton of the East”, this school in the city of Ajmer was originally established to be an institution that would educate the princes and princesses of the various independent states in the-then post-independent India. Having started with the Regency, the establishment slowly started accepting more pupils with time as the princely states were slowly absorbed into democracy and the royal families saw a steady drop in the resources and riches!

Today, Mayo College Ajmer falls in league with the best schools in the country; with a rich past and a richer heritage, it finally was time for them to pay attention to their legible heritage- the buildings that were for long used, modified without expert opinion and changed on will to accommodate the increasing number of pupils were to finally get the care they needed and deserved!

Once on-site, the team found out that rampant addition had been done to the buildings without any concern for its heritage status. With the dissolution of the princely states, more students came on-board. Boarding spaces were allocated to them quite randomly, fitting in students where possible, and doing considerable local modifications to achieve the same. Balconies were covered in places with PVC sheets, existing windows closed and new ones were made, pipelines attached that were visible on the external façade, buildings made in front of the houses to accommodate kids, and so on, all of which were temporary solutions to a permanent problem. A similar type of problem existed in almost all the different boarding houses that were there.

After a successful presentation on the proposed work plan, Basics was impanelled for the job. The catch followed- work could only be carried out on-site for a period of two and a half months every year during the summer vacations, and one boarding house was to be taken up per year. The project started in 2004, and the last of the houses finished restoration in 2013- this has been the longest assignment we have taken up so far!

The bottom line to the restoration efforts was to get the original character back! This involved getting rid of all the unscripted interventions and reverting the building back to its original shell. Quoting a statement we used from our original presentation, “These are class heritage buildings, the first and the last thing would be to get the character back”. It was strictly decided that no change will be done to the external façade and changes in the internal portion that would interfere with the façade were to be avoided at all costs.

The next important thing was to raise the minimum standards of living for the students residing in these houses post-upgrade. Considering that there is a lot of ownership vested in the students, it was an important responsibility for us to do the upgrade in a manner that produces rooms which synchronize with the students! Given that the rooms where pupils stay during their schooling are almost an identity for them, the accountability vested on us was enormous.

There were twelve boarding houses in total out of which eight senior boarding houses were to be conserved and remodeled by us. These were Ajmer House, Bikaner & Tonk House, Bharatpur House, Colvin House, Jaipur & Oman House, Jodhpur House, Kashmir House, and Rajasthan House. The overall planning and design of these individual houses were quite similar to each other as they all served a similar purpose, but they all varied considerably in finer details- each carried distinct marks of their own kingship and land, and a major challenge was to revert these buildings back to what they originally were.

The work was to happen in an extremely organized and pre-planned manner- dates and deadlines were not to be missed, or else pupils would come home to an unfinished room, unfit for occupation. The first step was preparing measured drawings of the concerned house and to extract plans, sections, and elevations of the existing condition. The buildings were condition mapped, and all faults, vulnerable areas, cracks, additions, and areas of distress were marked. Once the measured drawings and structural assessments were done, an assessment and analysis of the building condition based on defect & deterioration were identified on-site. There used to be a number of months in planning and preparing the reuse proposals. The final design proposals were to be ready by the start of the year and the same submitted for budget sanctions, which had to be wrapped up by March. Once the sanctions were done, calling tenders for construction and other official documentation took two months. Work plans, schedules, drawings, and details used to be ready in advance, and the day after the summer vacations started, the construction used to start in full swing. This was the schedule of work for every year until the last of them were finished in 2013!

When the buildings were originally built, they were made for princely members and their staffs. The central room was large and high and was for the royalty whereas the other smaller chambers were for an assortment of support staffs that used to accompany him/her. In keeping with the old Indian norm, all bathrooms were placed outside the main building. The new brief called for dormitories with attached washrooms, common room, and reading room facilities. The rooms were to be such that they have all the necessary amenities like beds, cupboards, and tables for study, and be well ventilated, as well as airy. This was the most challenging part of the process- internal planning.

Creating rooms that can accommodate a minimum of three pupils was the major challenge. In many cases, walls were torn down to merge two smaller rooms into a single dorm, and there have been instances of walls being put up to make do. There have been instances of making dormitory rooms that accommodate five persons, it was impractical to cut short the rooms further as that would raise issues, financial and otherwise. Introducing bathrooms have also been a problem that took much brainstorming to solve. With a no-disturbance-to-the-outer-façade policy, the only way out was introducing ducts. While bathrooms on the ground floor enjoyed an advantage, ducts had to be drilled through floor slabs for bathrooms on the upper floors. These slabs were designed in a manner to remain inconspicuous, at times hidden inside dressing cupboards or at times running in between two of them.

A careful restoration of the outer facade has been done so as to restore the original.

Local workforce was the only option- the knowledge and expertise that has been passed onto the present generation of workers through their family were put to effective use. Intricate attention was given to the stonework, the outer façade was thoroughly cleaned by indigenous methods using dilute acid. All stones that were used in the original construction was sourced from the local stone mines in and around Ajmer, with Kota stone varieties being used actively. The expertise of the stonemasons came to use- they were able to identify the quarry by a mere look at the stone, and same varieties were brought from the same quarries to ensure similar color and pattern. All instances of metal jalis were removed and were replaced by stone jalis. These were an exact replica of the existing jalis, some of which also needed repair. All instances of broken and/or disintegrated stone structures like arches, lintels, chajjas, bass, and relief work on the façade were identified and were reproduced meticulously on stones having a similar profile so as to ensure complete visual semblance.

There were numerous instances of breaking and making walls throughout the years. Material efficiency was wisely achieved by reusing the stones from the dismembered walls in erecting new ones or repairing existing ones. All walls which were partly torn down to accommodate a door or a window were repaired by using stones from the same lot, and new walls were made using burnt bricks so as to maximize usable carpet area. Chipping into or breaking lime concrete construction was not an easy task and thick walls were not torn down owing to structural purposes. Sufficient girders and external support were provided when any portion of the building was taken down so as to ensure structural stability. No portion of the job involved any compromise in the structural integrity of the buildings. All the old woodwork was carefully taken out, refurbished, and polished to give a new look and put back in place. All new woodwork followed the details meticulously and a similar finish was achieved. Solar water heating facilities and panels have been installed so as to cut down on exhaustible fuel usage. The use of artificial air conditioning has not been necessary as the thick stone walls keep the internal temperature to a comfortable range.

But perhaps, the biggest challenge has been execution- to completely renovate and remodel a heritage residence within a crisp two and a half months was a risky challenge, something that was possible because of the deep understanding and coordination between the design team and onsite engineers! Multiple teams were put to work simultaneously to speed up the process. If dismantling was going on, there were at least two teams dismantling on both the floors, which even went up to four for the larger residences. Workers worked for a minimum of ten hours daily so as to ensure fast, on-time delivery. All queries and troubles on-site were solved by us on an urgent basis (within hours, not even days). At any particular time, the schedule, plan, and materials needed for the coming few days were made ready so that there would be no delay! It took a meticulous amount of planning, management, and efficient coordination between the design team (we!) and the execution team at Ajmer to pull off these renovations! We appreciate the sincere effort put in by the execution team for all the years in ensuring smooth construction and thank them, heart, fully for the same!

What started with a lot of apprehensions and doubt soon became an easy affair. We admit, the first few were hard, but with time, as we jumped from one house to the next, the process became smoother for us! In the end, we are proud to proclaim that the restoration of the houses was much appreciated by not just the administration but the students using them as well as they rediscovered their hostel lives in the new setup! We architects design space only once, and happiness lies in seeing that space being built. But seeing the users living their lives in them and identifying their lives with them, creating memories for a lifetime? We would call that bliss.

Till the next time,
Team Basics. 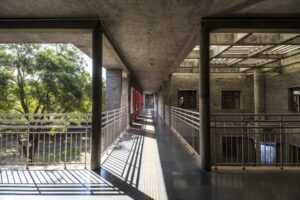