In 2009, Basics was approached by the apex management of DCM Group of Industries for an upgrade to Dr. Banshi Dhar Shriram School in Kota. Located at Shriram Nagar in Ladpura, Kota, it is a Corporate Social Responsibility initiative by DCM for the benefit of the local population. It has been named after Dr. Banshi Dhar Shriram, one of the pillars of the conglomerate. The school is being promoted and run by the Shriram Social Development Society.

Started in 2008 as a primary school, the institution was functioning from an old dilapidated single storied structure having an exposed rubble masonry construction. The clients came to us with the idea of restoring the existing structure, with floors and rooms to be added to accommodate the increasing influx of pupils.

Having started the initial planning on the given brief of restoration, the team soon realized that the existing building does not possess the necessary structural integrity for the required course of actions, and design proposals developed on the same will be unsafe. Frequent deliberations and brainstorming sessions later, we arrived at the conclusion that adding floors to the existing was an impractical solution. This being a CSR initiative, there were mandates on the finances, and it was a challenging task on our part to make the clients agree to an alternative. Structural reports were procured from experts, and a comprehensive budget was prepared by the office for two distinct scenarios- one where the renovation is done, and another which takes an alternative. Having clearly established that it is wiser to leave the existing building as-it-is, the final decision was to construct new buildings in order to meet the requirements. Having established this as the minimum viable plan, we proceeded.

The project was undertaken in two parts. The first was to prepare a master plan to incorporate the existing buildings and propose new structures for current and future requirements including classroom blocks, administration, laboratories, music rooms, a sports complex, playgrounds, landscape etc. The second part involved designing the first two phases of the master plan measuring approximately 40,000 sq. ft.

The existing building was retrofitted to function as the new kindergarten block while a new master plan was drawn up for the new structures. The prime factor to be taken into consideration was the climate of Kota. Having a hot and dry sub-tropical climate, the building demanded climate responsiveness. The clients had asked for a design that excludes all unnecessary cost, is simple and low on maintenance. This meant that facilities like air-conditioning, unnecessary cladding, and fancy treatments were off-charts. One might think these simplifies the process, but we will humbly contradict. While this definitely makes the building simple, the design gets complex with each passing parameter.

The site was a predominantly sloping one, which was solved by landfilling to achieve a flat topography. In designing the upcoming structures, the norms laid out by CBSE on the detailed requirements were followed meticulously. These norms were combined with indigenous methods of local construction to create a building that appeals to the local built form and is functional. In prescribing to the existing socio-cultural statement, we also ensured that the design is sustainable and boosts the economy by employing local materials and labor in the construction of the structure. The planning of the building revolves around a large open green and a smaller courtyard. One finds the parking lots immediately upon entering on one side and a green mound on the opposite. He is then led into the main patio, the concrete pergola on top of which plays with the user through a combination of light and stark shadows! The user has the choice to go into the administrative block or proceed to the classrooms from this point, and routes vary accordingly. The entire structure is two floors high and has been constructed in two phases.

Phase A of the project was limited to execution of the administration block. Span across two floors, this structure accommodated all important office spaces, principal’s room with a reception/waiting lobby, conference space, staff rooms, library, and stores. Located just opposite of the central corridor are the laboratories and practical rooms; their close proximity to the staff areas enhance quick reaction in case of any occasional trouble in the practical rooms. The admin block boasts of a central courtyard with a semi-shading pergola, creating a small congregation space, which is also frequently used for wintertime outdoor classes.

Phase B & C of the building involved the construction of the classroom block. Employing a typical floor plan on both the levels, the design is that of a traditional corridor-faced series of classrooms. A total of sixteen classrooms have been constructed and washrooms are present at the end of the corridor on both levels. The staircases are wide, and placed close to the classes, ensuring easy conveyance and a quick escape route when necessary. This new building has a wide U shape and is fronted by the existing double-story structure functioning as the kindergarten. The intermediate space is the main courtyard that sits right in the middle, creating a complete visual relationship with the building. A T shaped single story building was also in-place, existing next to the existing structure. Cutting right through the two smaller green courtyards, this building houses the primary section and the language laboratories. Of the three courtyards that lie side by side separated by buildings, the central one is utilized as an open-air amphitheater. The stage and associated facilities are accommodated in a small building constructed on the outer end of the ground.

In conforming to the low maintenance standards, we have actively used concrete and stone as the primary building materials.  The design philosophy revolved around the facets of minimalism, and a streamlined look was to be achieved. A major aspect of the design was the structure- the desire of clean surfaces led us to extensively use flat slabs so that ceilings are plain, without hanging beams obstructing the visual aesthetics. No columns can also be seen as they have all been neatly clad with stone blocks. All the brick walls have also been lined with stone blocks. In a bid to make the building nominal and effective, the design team ensured that the only materials visible on the outside are concrete and stone. This gave the building a unique identity- one that was in tandem with the existing visual culture, responsive as well as low on lifetime costs.

Ramps have been provided at all places within the premises, ensuring that the design is barrier-free and doesn’t come out to be troublesome for differently abled users.

The Rajasthani style of employing courtyards has been actively used in the site plan. The design of the educational complex employs an intelligent combination of multiple buildings with central courtyards, semi-covered spaces, patios, and corridors. This has been done to regulate the temperature of the heat island through principles of passive cooling. Upon close deliberation, one will find a gradual transition of spaces- courtyards, semi-covered patios, corridors and finally classrooms. Open corridors and the use of ventilators allow for natural cross ventilation. 380 mm thick walls act as an effective thermal barrier, and the use of deeply recessed windows allow ingress of diffused light but restrict direct solar radiation from entering, thereby keeping interiors cool on a day with substantially higher outdoor temperatures. Use of stone cladding also acts as a contributing factor- stone is an insulator, and has a characteristic cold touch, even on hot days.

The selection of materials has been kept within a local palette so as to cut logistical expenses and to support the local economy. The fly ash produced from the client’s industries have been used for filling the site to even the sloping topography, thereby putting a potential pollutant to good use. The biggest challenge of this project would, however, be the stones. Dabri, a local variety of grey stone has been used in this project. Kota being one of the hubs of the stone industry, the design team was quite settled on the extensive use of stones. The unexpected problem came when we actually set out to the showrooms in search of stones. Surprisingly, it was discovered that the selling price of the stones offered by most outlets went well beyond budget, and it was impossible to procure them. Multiple trips to the showrooms, and failed negotiations later, we half-heartedly decided to stick to the conventional plaster and emulsion finish. The turn-around was possible when during one of their final visits; the team discovered that one outlet was scraping off large amounts of stone as waste products after shaping the quarry-received chunk into blocks of the required size for export. These waste pieces had the required dimension, and it was found that tile shaped slabs of stones could easily be carved out of those! The owner gladly agreed to the waste product being voluntarily carried off-shop- it was a steal for both the stakeholders! Stones procured at a nominal cost and benefit made out waste material- the story couldn’t have had a sweeter ending. Unfinished blocks were chiseled to the necessary shape by local laborers on-site. A considerable reduction on the budget was achieved, thanks to the team for one final search- the last among the many one-final-time.

The Shriram School (phase A, B & C) was completed in 2014, and fresh admissions started that year. Currently, the team is working on the next phase of the project in which, a complete master plan of the site is being developed. More buildings and a full-fledged auditorium will be added along with facilities like football grounds, tennis, volleyball courts, and other activity spaces in a bid to encourage co-curricular activities. Landscaping is also being actively incorporated as a part of the new masterplan. Scheduled to be completed soon, the complex will have a fresh restart as a comprehensive institution that mentors pupils for a holistic personal growth and development during their formative years, ensuring that they grow up to be responsible citizens at the helm of a proud nation.

This school is special because it is extremely close to our heart. Well, of course, all our projects are dear to us, but it holds on to the corner of our heart like a favorite child. And we don’t think we need to tell you why again.

The fact that this project is still ongoing in the form of an advanced phase masterplan solidifies the fact that design is not a catch-and-break affair, but a continuous journey of thoughts and processes, one that increasingly defines itself with every passing day.

Till the next time.
Team Basics. 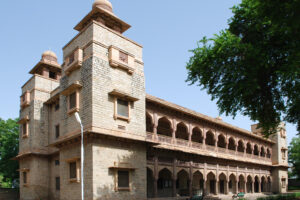 The story starts about a decade and a half ago,[...]

We're not around right now. But you can send us an email and we'll get back to you, asap.